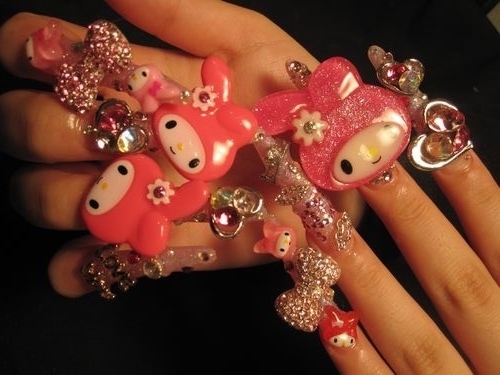 Nail art equipment slots, coming soon to an RPG near you.

“Decision fatigue helps explain why ordinarily sensible people get angry at colleagues and families, splurge on clothes, buy junk food at the supermarket and can’t resist the dealer’s offer to rustproof their new car. No matter how rational and high-minded you try to be, you can’t make decision after decision without paying a biological price. It’s different from ordinary physical fatigue — you’re not consciously aware of being tired — but you’re low on mental energy. The more choices you make throughout the day, the harder each one becomes for your brain, and eventually it looks for shortcuts, usually in either of two very different ways. One shortcut is to become reckless: to act impulsively instead of expending the energy to first think through the consequences. (Sure, tweet that photo! What could go wrong?) The other shortcut is the ultimate energy saver: do nothing. Instead of agonizing over decisions, avoid any choice. Ducking a decision often creates bigger problems in the long run, but for the moment, it eases the mental strain.”

Yes, yes, not all F2P models are evil.

But of those that are (even the amazingly beautiful luscious evil that is PWE's Forsaken World), I suspect a lot of them depend on decision fatigue pushing people to buy impulsively without calculating the costs, whether in-game or in actual cash.

It would also explain why I simply can't understand some of the Auction House prices in Forsaken World - where I've seen people selling stuff for half of what it's worth in actual currency, if you were to convert actual to FW's currency.

...people are tired, impulsive, don't want to do the math (gated through 4 currencies), and they want money NAO. So they buy a high-priced item and undersell it, because they honestly don't know it's worth / are too tired to think through its conversion.

I have personally worked out these numbers for some in-game acquaintances when telling them to buy/sell higher/lower, and they simply don't want to listen. That's too much work! Games should be fun! Let me spend my moneh how I want! Fairynuff.

I don't mean to imply I'm immune to this too. In FW, converting currencies (through all 4 gates) has become second nature for me. But in the other PWE games I've played, decision fatigue from constantly WATCHING myself (can't do this can't do that) contributed hugely to my dropping the titles.

...PWE are like the evil marketing gods the evilmarketingbits of nugget want to grow up to be. 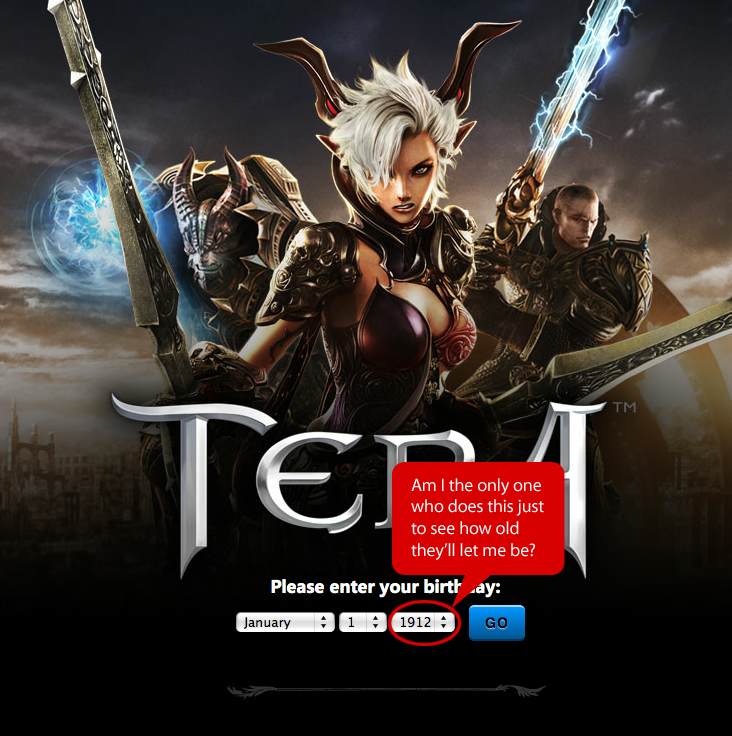 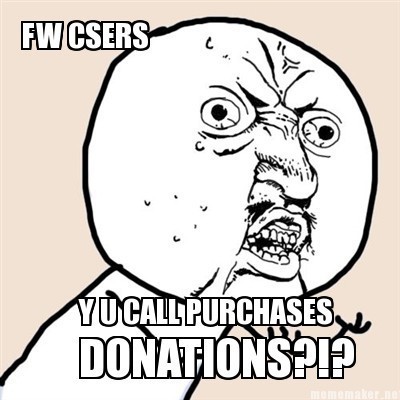 Ok, ok. I also CS occasionally, so it should be 'some' FW CSers. ;) But adding subtlety to trollface is just not done!

Still, from this far away, you can't tell that they're corpses!

>.> I shall see if my new (ok 6 month old) lappy can install this - on my previous one, it spat out a disdainful error and then simply refused to complete the install.

People who have played GW1 will know why "balance" is bad.

True, a PvP system based on skill only and nothing else is fair. However, such a system has three fatal flaws.

Firstly, it is uninteresting, because the skill gap between players in an online mmo is never going to be large enough. People switching from gear-based MMOs like Forsaken World to skill based and super balanced games like GW2 tend to see themselves as the under-appreciated "pros" that could easily beat the "noob" CSers, if only there was no gear difference.

These same people will probably get their asses whopped roundly and soundly by real "pros" in GW2, and feel more worthless and have less fun than they did in Forsaken World.

Anyone who made it past rank3 hero and r1 gladiator in GW1 will know that only a select handful of r11/g7 players in GW knew how to play the game at a level truly above the masses. To attain their level of skill, one must practice interrupting/KD locking/synchronized damage spiking with their teams constantly. Getting to this level of skill in GW is much more difficult than getting level 3 wings in Forsaken World. GW PvP is much more selective than Forsaken World PvP.

The second problem with these "skill based" games where gear does not matter is the lack of connection between the player and his character. If all your achievements and efforts in PvE will never contribute to your combat effectiveness in PvP, then what is the point of accumulating wealth/power, which is what an mmo is all about? Characters are created and deleted every month to catch up with the new meta-game. A player can be any class and any spec. Nothing is permanent. Long-term investments mean absolutely nothing. You might as well play a FPS or RTS game.

The last problem is best demonstrated by a quick example:
An extremely skilled and experienced warrior who has played GW since its release for 4 years faces a necromancer who just recently bought the game and knows nothing about it. The necromancer click on two hex skill, and the warrior is now removed from the game. Thats right, removed from the game. He is effectively deleted from the server for the duration of the hexes. Oh and one more thing: these hexes can be chained. No amount of "skill" could save the warrior from his natural counter class. That is how bad it is. In Forsaken World, an assassin could still kill a warrior through BoR if he has the situational advantage with superior gear/red hand. A priest with barely any damage can still solo a vampire with lvl 2 wings if the vampire has 0 mana. In GW, there is not even the remotest theoretical possibility for a player to defy the iron rules of "balance" imposed by the developers. You WILL get countered by your natural counters, and thats that.

Whoa. It's always interesting to read something that is right on the opposite end of the pole when it comes to what you believe.

This guy isn't trolling. And where he's coming from... I can understand due to the kind of point of view that he is espousing.

Which I can sum up in one sentence:
Balance is bad because making skill the cornerstone is too elitist.

(What I'm getting), FW is better because:
Cash-bought power is easier to acquire than skill, and therefore not elitist.

And no, nugget is not any kind of GW PvP god. Poster says he has R4 Gladiator, which is certainly a mark of GW PvP skill.

To be honest, I'm not even sure quite why I posted this other than, 'Wow, that's a lifeform so totally different from me that I'm surprised we share superficially similar skins.'

P.S. The last scenario he's describing isn't balance, it's IMbalance. It's precisely what ANet mucks around with PvP and PvP skills SO often to try to put right.

Could be why his viewpoint seem to be the antithesis of a nugget's. Nugget is all about proving to nugget that she got better than nugget. =P That nugget beat nugget! *beat self* Beating others is just icing. From this, we can see that nugget has a much larger ego than quoted-fellow, for to nugget, nugget is the only important milestone. XD 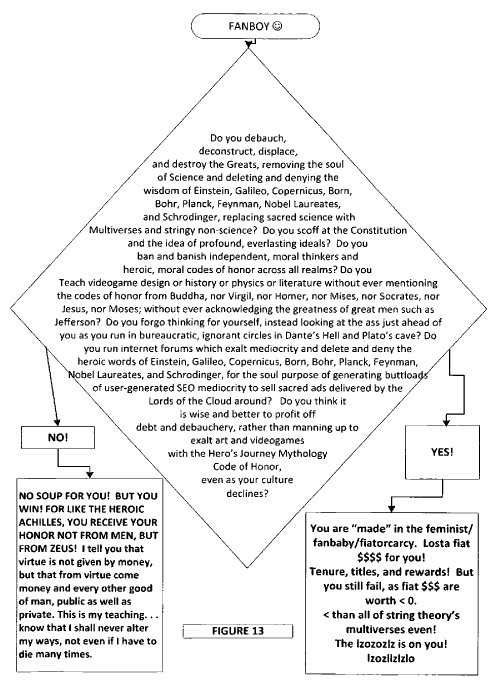 An actual, hilarious patent! Page 14 is shown above.

Ok, so time to lick our wounds, get back on the horse, and find a new job. At least we stuck it out and won't have to pay back our relocation costs according to the Chief Operating Officer. Wrong! On June 1st, we get a letter from Atlas Van Lines with 10 days to pay our overdue moving bill of a sizeable amount. Six months has gone by since our move. There was no notice at any point that this had not been paid and now we get a bill with 10 days to pay. Why now? Haven't they had 6 months to collect this? Didn't the company say we would be let out of our contract since they folded? Couldn't they have given us a heads up at any point before we were broke and our savings gone to feed our children? After all, a heads up on this might have alerted us to a problem with 38 Studios before we got to this point. Well on one page in a series, of approximately 45, we signed a document stating in tiny print that we would be responsible if the company does not pay. I don't know if most people are aware, but moving with three kids, a dog, and a cat from one coast to another is a bit tiring and this document was of course presented on the day our stuff arrived in Rhode Island, which was chaos.

It's so nice to seem some indie folks making it on their own on the strength of their work. Humble Botanicula Bundle's Flash-based 2D-art games are truly lovely. They're like super cute 2D animated films that you can control, and the games themselves are a great example of oldskool point-n-click adventure.

If you missed the bundle, you can still get the games on gog.com. I learned about the bundle from GoG in the first place, which seems incredibly generous of GoG. Yes yes, doubtless they had a marketing deal blah blah blah... but GoG seem to be really good guys. And of course, it doesn't hurt that they also made Witcher. ;)

"In Journey," explains Chen, "we want to offer the player the choice between individualism and group conformity... We wanted to create an environment where the cooperation is not forced; you're totally fine doing it yourself. If you choose to cooperate, then that is the real essence of connecting two players."

I remember reading (unfortunately I forget the source), that one of the problems with graphical video games is that while you can tell when someone is close enough to shoot, you can't tell if they need a hug. While I doubt Journey does the latter either, it seems to have come closer than any other graphical video game out there.

(I say graphical video game, because in MUDs/MOOs/MUSHES/what have you, you can tell, about the hug bit.)