When players don’t need each other it breeds anti-social behavior and it results in the devaluation of other players. Players become nothing more than advanced NPCs.

Not true at all. Guild Wars has an amazing community, despite the fact that if you have the third campaign (Nightfall) or the xpac (Eye of the North), you effectively don’t need people at all, except in PvP.

There are player organised events, supported by ArenaNet. Most recently, Pink Day in LA:
http://wiki.guildwars.com/wiki/Pink_Day_in_LAThey set out with a goal to raise US$1337 for the Canadian Cancer society. They ended up with US$11,000. A totally player-organised event, for something outside of the game, which ArenaNet supported by introducing a totally new dye colour.Official site here:
http://pinkday.grimforge.com/And here is my take on Pink Day in LA 2010:
http://nugget.posterous.com/pink-day-in-lions-arch-2010(Please note, I’m not affiliated with these guys in any way. I was just lucky enough to catch the event by chance, and I thought the whole thing just rocked.)There are a wealth of other player-organised events, and during ArenaNet’s festive events, especially Canthan New Year, guilds and/or alliances team up to ‘sponsor’ districts, so that everyone has a very good chance of getting prizes. Sponsorship can involve playing minigames, or collecting scavenger hunt items and handing them to NPCs, etc. Sponsorship is totally free. People do it because they want to. Because they enjoy it. I took part in helping my guild/alliance with sponsorship this Canthan New Year, and I really liked it.It’s not a unique thing. It’s not something done because people NEED each other. It’s done because people simply want other people to be happy in a game they enjoy.For a game where you can play 95% of the PvE content without ever grouping with another human, Guild Wars has a damn good community.You could, however, argue that GW is an outlier. That its gaming structure so unique within the MMOverse, very much like EVE and ATitD, so much so that the normal rules don’t apply. I’m not sure if that’s so, but I do allow that it’s possible.Cynical nugget writes stuff praising human nature, whoda thunk! =)

[Originally a spammy rebuttal comment, see the full original post over at Wolfshead Online. It's possible you'll think a nugget is being too optimistic!] 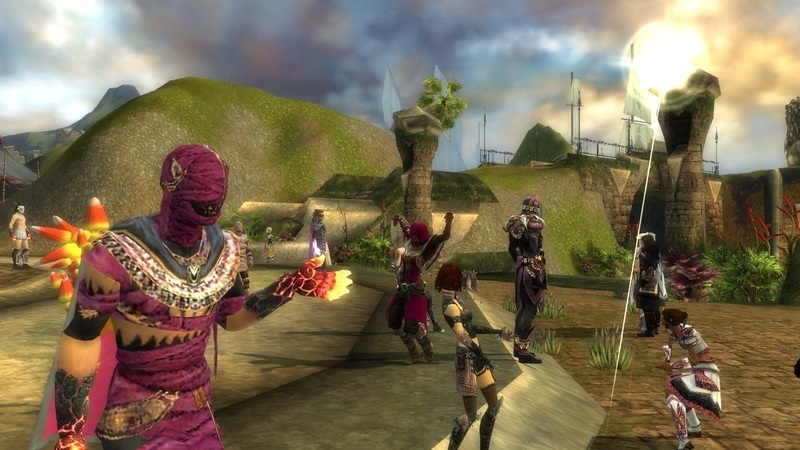 Earlier today, I switched to International District to sync Vizunah Square with someone, then, like most senile people, forgot to change it back.

A couple of hours later, I wandered over to Lion's Arch, and found a whole bunch of pink-clad people bouncing around, dancing and whatnot. Now, spontaneous strange dancing does happen (I think) in every MMO where there IS a /dance in the first place. However, spontaneous strange dancing of people all dressed in varying shades of pink is... not so common. Add this to the fact that random people kept asking when the 'Pink Dye Guy' would show up, only to be told, 'In 8 hours', I decided to investimagate!

And this is what I found. O.o
http://wiki.guildwars.com/wiki/Pink_Day_in_LA/PinkDayArchive

Well, guys and gals, it's about that time of year again. Saji here and I'm going to give you a little information about this year's, Pink Day in LA.

We're going with the theme that, "Gamers Care Too." Why? Well, with all the recent news stories about how people who play video games, especially violent ones, are bad people, and when a crime is committed, such as a shooting, you will no doubt hear about how the person was playing the newest Grand Theft Auto game, or some other violent game. But, obviously, not everyone who plays games is violent or bad. We're doing this event this year to show others that an online community with players from around the world can get together and support a worthy cause. We want to show the world that GAMERS CARE TOO!

Now, remember last year, where I gave a little speech on the subject of Breast Cancer? Well, it was awkward, trying to get people's attention with others constantly spamming. So, this year, there won't be any big speech on the subject, but instead, DRGN is making a site dedicated to informing gamers about Breast Cancer risks, treatments, and more. Check it out over at the Pink Day in LA Website.

"But what about in-game?" - I hear you ask. Well, to show support, like last year, we want everyone to get their armor decked out in brilliant pink. We want to see everyone in the district wearing pink, but, you'll have to supply your own dye! Sadly enough, last year we had many people take the free handouts of dye for granted, along with the fact we had rude players who interfered with other aspects of the event (such as the end photo-ops).

If you have any questions or comments, feel free to reply to this post or email me at, mastersaji@pinkday.draconus-united.com or you can reach me on AIM or Yahoo IM at, Tooker311

And they've done it for 2 years already. O.o

As a former WoW player, all I can say is... wow. Not without respect for BBB's Raid from the Heart recently, I never saw anything even vaguely like this when I was playing WoW. Player-run events, sponsored by guilds, for no other reason than they find something important. Just... wow.

I think it helps greatly that in GW, as opposed to WoW, you can switch servers whenever you like. So there's no, 'Oh I would love to but I'd have to organise it on MY server, or I can't make it on YOUR server because I don't have a toon there that's high level enough, that can get there, etc'. I had a poke around another player-run event earlier this year - Mantlecon, which was rather fun as well.

Somewhat related is GW's Canthan New Year, where alliances will sponsor districts... just because. They'll go farm up all the stuff the chefs need, so all people have to do (if they don't want to / care to / haven't farmed enough to help) is stand around and chatter and get presents.

This is one of the things I really love about Guild Wars, that I don't think I ever experienced in World of Warcraft.

It's strange, really. How is it that an MMO where you can choose to spend almost all your 'gaming' activity time with your own AI encourages so much more player-run social interaction than one where people are forced to group with each other? Or did I just answer my own question?