Forsaken World's priest class is a sad example of how dev confusion with class roles, and naming classes 'priest', 'cleric', 'non-ninja monk', 'medic' (or any other name players tend to automagically associate with healers if they've a) played any of this sort of genre at all, or b) played D&D), influences class perception.

Or more specifically, it's a negative example of how to handle a class that has three talent paths or specs, with one of them focused on healing, and the other two being no-holds-barred DPS of DOOM!

Because that's what priests in FW are. Two of the trees are flat out damage dealers, one more PvP focused, one more PvE focused. They are not inferior to other damage dealers in any way (once high level enough and people get their skills blah blah), and they do, in fact, have the highest Damage Per Hit (DPH) of all the classes, if not the highest DPS.

If FW priests don't spec for healing, they are NOT healers. They heal for about as much as an even-levelled potion.

And yet the LFG tool classes them as healers, no matter what. Main healers, to boot.

This is where I conclude that the problem is the word 'healer', and how people (including designers) define healers. What they've done is put a Franciscan, a Templar, and a Dominican together and said, 'Wut! They're all priests!' Well yes, but they're not all healers. And that's the problem with the LFG system, and player perception once they see a word that they associate with 'HAELZ!'

The LFG does this with vampires as well, classifying them as healers, but here's where an odd thing happens. And here's where player perception straitjacketing class roles due to poor naming really comes to the fore.

The other two specs are damage dealers, very competent ones - again with a PvP and PvE emphasis.

Yet no one in instances EXPECTS vampires to be specced into the healing tree.

LFG with only priest for heals, and the priest isn't heal-specced:
WTF U MEAN UR NOT HAELZ PRIEST! U SUK! U BETTER HAEL ME ANYWAY! *group fails* WTF! U SUK! SUK PREST!

Most amusingly, the ONLY class where all three specs are some kind of party support with low to average DPS, and high to average party support is the bard. Which the system classifies as 'support healer only'. Go figure.

So all those ancient superstitions about Namez having POWWAH? >.> They're right. 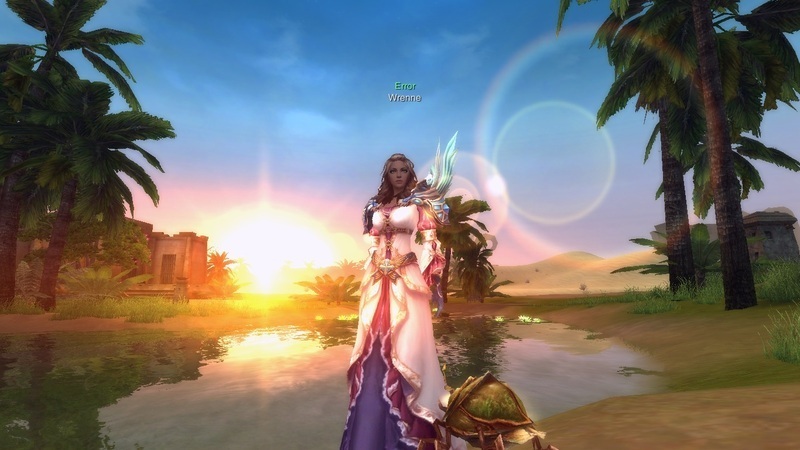 Particularly funny because her L30 chest rather showed off her - well - chest. Underboob, sideboob, cleavage! O.o
Browse the Archive »