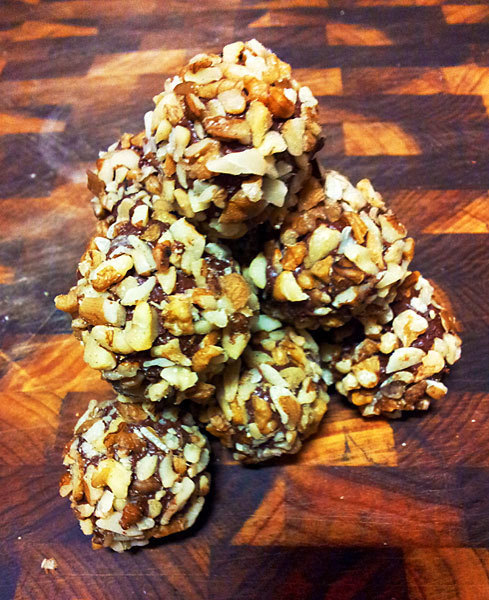 My silly and ridiculously easy chocolate pie and variants made me wonder why I couldn't make things that could pass for truffles. After all, the pie filling prior to my folding in the whipped cream was an awfully rich, dark, ganache like thing, so I thought to myself, 'Why, nugget, can you not thicken that up a bit, roll it in balls, then roll the balls in cocoa, and call them truffles?'

>.> And then, as nuggets are wont to be, I got sidetracked.

'What, my nugget, if you were to use Nutella instead of condensed milk with lemon juice? Would that not turn them into dark hazelnut truffles? OoOoo! A ratio of 2 parts Nutella gooey to 3 parts dark choccy could result in a very truffle-y thing!'

But then, of course, I had to check the Interwebs to see if anyone had the same idea. And behold, they did! Except that their ratios were vastly different from mine.

The little crushed walnut coated balls of Nutella DOOM shown here are a result of that recipe I looked up.

I didn't measure the honey or butter either, just eyeballed as usual. The chocolate was easy, all I had to do was snap the bar in half, and the Nutella came in 400g bottles. XD

If you're a Rice Cooker Disciple, just dump all the above ingredients into a bowl, dump the bowl into the rice cooker, and set it on cook until it pops up (which it will when everything is melted enough).

If not, you'll have to do arcane water bath things that I don't wanna know about. XD

Mix all the melted stuff together, dump in fridge to cool. My truffle mixture took 2-3 hours before it was workable, and most definitely did not become 'doughlike', nor did it 'pull away from the sides easily'.

After making a chocolatey-muddy mess of my palms balling up the first 4, I realised that if I ran my hands under the cold water tap every 2-3 balls, they would be much easier to handle. Yay for temperate countries! I think back home in equatorial climate, I'd have to grope ice cubes instead.

Unfortunately, all three of us find these poor nutty balls too sweet and too Nutella-ey. It's not that they aren't good, it's more that they aren't to our tastes. If you're the type who wishes you could just eat balls of Nutella, dispensing entirely with the middleman of knife, spoon, or some kind of spreadable surface, these are perfect for you.

These shall be going to work with me, where, with their aid, I shall determine which of my colleagues like their Nutella straight. >.>

And next weekend, I'll make them with the ratio *I* like. =P